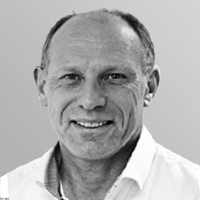 David is a founding director of Erris Resources. David is a graduate in geology from Trinity College Dublin and holds a Masters Degree in Mineral Exploration from Queens University, Kingston, Ontario. He has 29 years of experience in the exploration sector and has worked on and assessed exploration projects and mines in over 50 countries. From 1992, David was Chief Geologist for Minorco SA, responsible for Central and Eastern Europe, Central Asia and the Middle East.

He moved to South America in 1997 as a consultant geologist for Minorco South America and subsequently became exploration manager for AngloGold South America in 1999, where he was responsible for exploration around the Cerro Vanguardia gold mine in Argentina, around the Morro Velho and Crixas mines in Brazil and establishing the exploration programme that resulted in the discovery of the La Rescantada gold deposit in Peru as well as certain joint ventures in Ecuador and Colombia. David was also founder and Chairman of Stratex International Plc, an AIM traded company with exploration assets in Turkey and in which Teck Resources Limited is an equity shareholder. David is a fellow of the Society of Economic Geologists and EuroGeol. He is currently CEO of Thani-Stratex and non-executive chairman of Horizonte Minerals. He holds BA (Hons), MSc, FSEG, MIGI, P. Geo.